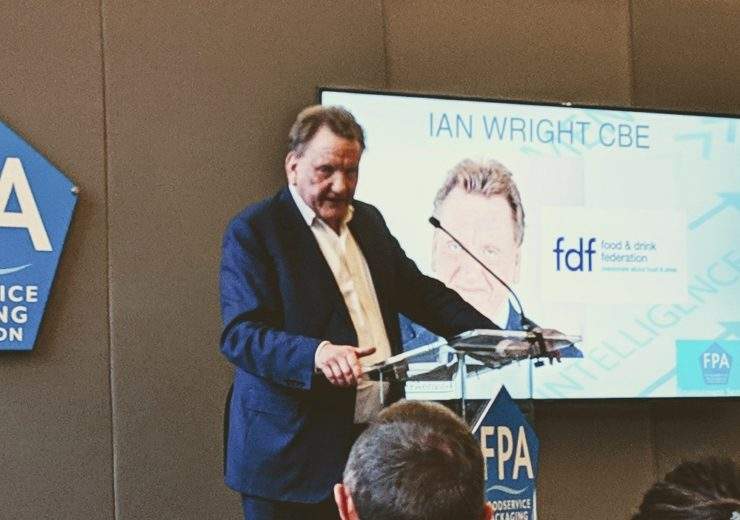 Brexit is the single biggest threat the food and drink industry has faced since the Second World War, according to one its biggest voices.

Ian Wright, chief executive of the Food and Drink Federation (FDF), told the government it must remember its first job before protecting the nation is to “feed” it.

Supermarkets including Asda, Waitrose and Sainsbury’s, alongside fast food outlets like McDonald’s and KFC, have warned MPs that a no-deal Brexit could result in significant supply chain disruption.

Mr Wright, who believes most of the industry is stockpiling food right now, said: “Brexit is the single biggest threat our industry has faced since the start of the modern food industry.

“The government has a problem, it has forgotten that food and its continuous supply is a matter of national security.”

How Brexit will impact UK food industry imports and exports

Mr Wright, who was speaking at the FPA’s annual environment conference last week,  also raised the issue of food imports and exports.

According to the UK’s Department for Environment, Food and Rural Affairs (DEFRA), 30% of all food consumed in the UK originated from the EU in 2017 – with more imports of produce like fruit, vegetables, meat and fish than there were exports of the same product.

Mr Wright said: “We have no conception yet of the level of disruption that we will see at our ports on 29 March, and we have no understanding yet how easy it will be to ensure order in the normal flow of imports and exports after that date.

“I think there will be some disruption at the ports – this will most likely hit Dover and Calais.”

Reports of retailers stockpiling food have intensified in recent weeks as the prospect of a no-deal Brexit gets closer.

In a survey conducted by the UK Warehousing Association (UKWA), 75% of its members stated they are unable to take on any more business at their warehouses.

DEFRA has even set up a ministerial position specifically focused to help with food supplies, with Macclesfield MP David Rutley now occupying the role of parliamentary under-secretary of state for food and animal welfare.

Mr Wright doesn’t believe stockpiling to be irresponsible, adding it is “completely prudent”.

“I think there will be shortages and I think this will happen for two reasons,” he said.

“One is because the ability to stock shelves will be absent, and the second is that we don’t know enough about our supply chains.

“People that have stockpiled ingredients will be fine, but probably only for a shorter period than they would expect.

“This is because they will stockpile, and then they will find that when this food runs out, they cannot then replenish their supplies after three or four weeks.

“There will be the second wave of disruption when the stockpiling runs out.

“And that may be when we need to turn to government and say to it in certain circumstances we need emergency supplies.”

Dr Fox said at a fringe event during the Conservative party conference in Manchester in 2017 that there will be “no disruption of trade” because the UK would replicate the 40 EU free trade agreements that exist once Britain leaves the union.

Mr Wright believes Dr Fox should be held accountable for those comments, adding: “At this stage, only eight of the trade agreements have been rolled over, and the government itself doesn’t think there will be more than a further four rolled over by 29 March.

“Now I don’t know what else the Department for International Trade is for, but whatever it was, it has failed in its mission to do its first and most important thing.”

Who is Ian Wright of the Food and Drink Federation?

One of the most experienced men in his field, Mr Wright took up his role at the FDF after 14 years at spirits and beer producer Diageo, including a role as corporate relations director.

Taking charge of FDF in 2015, he has been in charge of the organisation since the start of the Brexit process.

He was awarded a CBE in 2015 for “political and public service”.