What is Footprint US? The official Super Bowl sustainability partner 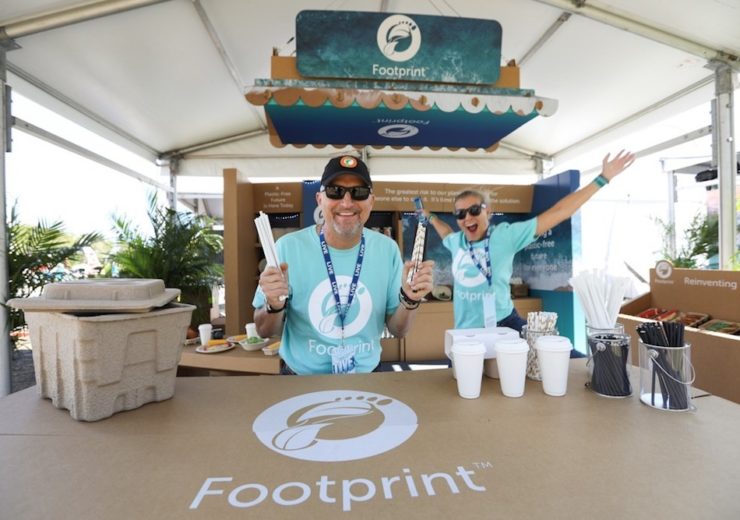 Footprint US was involved in the Super Bowl LIVE Environmental Village event in Bayfront Park (Credit: Footprint US)

From Patrick Mahomes II to Kyle Shanahan, Super Bowl LIV will see an array of debutants appearing at America’s biggest sporting spectacle of the year — including the event’s official foodware sustainability partner, Footprint US.

Founded in 2014 by two former Intel employees — Troy Swope and Yoke Chung — Footprint US is a sustainable technology firm focused on reducing or eliminating plastics through the development and manufacturing of products.

It aims to stop the estimated eight million metric tonnes of plastic that choke the world’s oceans every year.

From making computers to manufacturing bamboo-based packaging — how was Footprint US born?

The story of Footprint US starts in 1995, when co-founder — Yoke Chung — joined Intel. By that time, Swope had been at the tech giant for two years.

The pair were introduced to one another by fellow Intel engineer Todd Biggs, and “a lifelong friendship was born”.

They began innovating in the materials field when working as part of the team developing Intel’s Pentium II product.

Swope worked on materials and cost-saving, with Chung heading its lead-free packaging section. Both were recongised with awards by Intel’s sustainability department.

A few years later, he was joined by Chung — and together they developed bamboo-based packaging for computer manufacturer Dell.

In 2014, they founded Footprint US intending to become the world’s leading sustainable packaging and product company.

Straws, meat trays and frozen food: What does Footprint US make?

The company’s main area of interest is developing sustainable products for the foodware industry — manufacturing the likes of meat trays, frozen food packaging, and to-go containers.

In June 2019, the company was chosen by beer brand AC Golden, part of the Molson Coors Brewing Company.

AC Golden Brewing Company’s president, David Coors, said at the time: “As a company, environmental stewardship is incredibly important from the ingredients grown in the field to the packaging on our products.

“It was very important that we find a packaging solution that can perform at the same standards our retailers and customers expect with the current plastic ring.

“In this case, we are pleased with both the durability and environmental performance we’ve achieved with Footprint US.”

Footprint US has also develop paper straws that, it claims, can break down completely in less than 90 days.

Scientists estimate between 437 million to 8.3 billion plastic straws pollute the world’s coastlines, making up about 1% of plastic waste in the ocean.

Swope said at the time: “Replacing plastic straws will make a profound impact as they are among the most frequently found items in marine pollution.

“We are eliminating plastic pollution from getting into the water that is killing dolphins, whales, and other marine life.

“Our paper straws are designed to stand up to typical consumer use.

“They’re going to last a whole weekend at the beach, if they happen to get into the ocean they’ll break down completely in 90 days.”

Footprint US at this year’s Super Bowl

The first, called Sustainable Tailgating, featured some of the company’s compostable, biodegradable and recyclable items.

The second range on display was the Grocery Store of the Future exhibit, which showed how the firm has replaced plastic packaging in six food purchasing areas.

Included as part these were packaging for ready-to-eat meals and frozen foods.

Swope said: “We’re committed to eliminating the plastic that enters our environment, damaging beautiful environments like the one right here in Miami.

“That’s why we created sustainable, plant-based foodware that poses no risk to either land or sea creatures.”

Miami Super Bowl Host Committee’s vice president of partnerships and marketing, Brian Bishop, said: “We are thrilled to have Footprint US as our foodware sustainability partner for the biggest game of 2020.

“As material science innovators, Footprint US is creating a viable consumer package product suite to greatly help to reduce plastic waste that harms our waterways.

“They are valuable champions for our mission to leave a lasting green legacy long after the final game whistle blows.”

In 2015, she went viral with a video showing her remove a plastic straw from the nostril of a wild sea turtle.

At the event, Figgener spoke about the impact plastic products have on the health of our ecosystem and bodies.