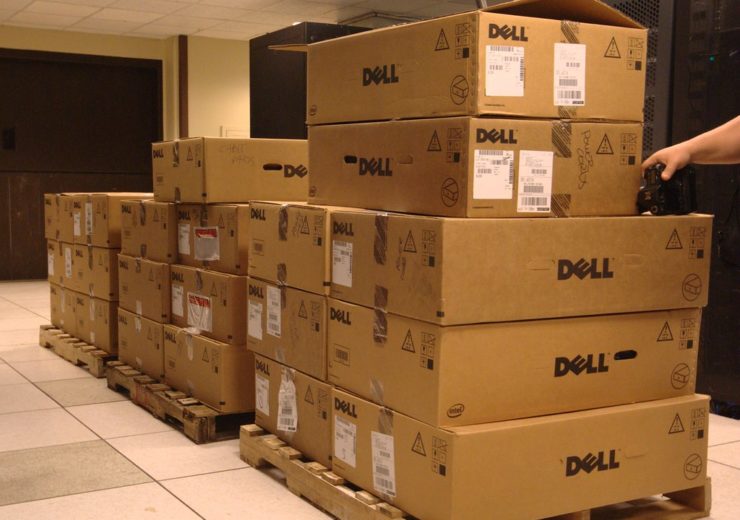 Dell has unveiled a grand plan to boost its green credentials by 2030, with packaging at the centre of its “moonshot” goals. Dan Robinson finds out how the IT giant aims to get creative in its mission to increase the amount of recycled materials it uses and cut down on waste.

Inside one of the buildings at Dell’s campus in the Red Rock area of northern Austin are three large piles of cardboard boxes partially blocking a corridor.

Next to them is a steel container. It’s thinner than a single stack but, apparently, can fit the contents of all 40 boxes on display.

The tote will be used to ship Dell’s data servers and is designed in a way so that it offers the same level of protection as the foam that typically sits inside cardboard boxes.

It enables the company to remove the need for these materials in shipments for these products, while saving 235kg in waste packaging every time it delivers a batch of 40 servers.

Director of system engineering Don Curlee says: “We can get two or three-times the amount of servers into a truck to send from our factory to a customer.

“So rather than needing a few trucks, we just need one, which is saving in emissions as well as money.

“The tote is providing the same protection as it would with cardboard boxes and foam. It’s also good for the customers because a lot of them don’t want the cardboard dust in their data centres.

“It’s very solid and robust because it’s designed to be used again and again. We’re still early in the process but we’re very excited about the savings it could make.”

Dell execs hold this up as the latest example of creative thinking in the mission to become more sustainable.

In 2014, the company unveiled a series of sustainable packaging concepts that attracted international attention.

Plastic bags were made from carbon that had been drawn from methane produced by cattle farms and common landfill, while it also created a packing cushion using mushroom spores.

Other materials it found new uses for included wheatgrass and bamboo.

More recently, Dell has recycled carbon fibre used in the aerospace industry to create the exterior panels that bear the brand’s logo on laptops, particularly in its Latitude 7000 series.

The company claims this can keep 900,000 kilograms of the material out of landfills and expects to grow its carbon conversion rates.

Distinguished engineer Nick Abbatiello says recycled carbon costs half the price and uses 10% of the energy of virgin carbon. It is also lighter, yet maintains its durability.

“We use carbon fibre from planes, taking the scrap metal and putting it back into computers,” he says.

“But there’s not a lot of 25-year-old planes using carbon fibre and coming to the end of life.

“The big challenge is getting hold of the material to recycle. We’ve just started shipping carbon fibre but won’t have any of it to use until those laptops come back in a few years’ time.”

Another part contains 25% ocean-bound plastic and 75% recycled plastic, with work underway to increase the amount of plastic that will otherwise end up polluting the sea.

Abbatiello adds: “I was asked a few years ago about what the new super material is going to be. They were expecting me to say something like a new metal alloy but my answer was that it’s a group of materials.

“That’s where a lot of innovation is going on now, combining things like biomaterials and recycled content.”

Such creativity will be required for Dell to fulfil the social impact goals it pledged as part of its Progress Made Real plan at a summit in Austin, Texas, last week.

Alongside targets to increase the diversity of its workforce, use data ethically and improve the lives of a billion people were a number of commitments around packaging.

The company says it will recycle an equivalent item for every product it sells and wants to lead the circular economy – a concept in which goods are designed with the intention of being reused continuously – by using recycled or renewable materials in more than half of all products.

Cardboard boxes use 93% recycled content but another target is to increase this to 100%.

“In the beginning, it’s usually more expensive because you’re making some capital investment into infrastructure to utilise the material,” says Abbatiello.

“But like any technology, it comes down with scale so it’s about how fast you can scale it to bring the costs to the same level.”

David Lear, vice-president for corporate sustainability, says the company has been working towards this point over the past decade, ever since a similar vision was outlined for 2020.

He says: “We realised we can design a better product knowing we can get the materials back and we’re integrating 100 million pounds (45.4 million kilograms) back into production each year.

“Electronics waste is one of the fastest-growing waste streams in the world and we want to be part of the solution, not the problem.”

“How do we get stuff back that we’re putting out there?” he adds. “We can be recycling, refurbishing and putting that product right back to our customer.

“We can’t do this alone though and know we need to educate customers, as well as engage the rest of society, to create this ecosystem of companies using natural resources.”

Founder and CEO Michael Dell admits these “moonshot” goals will be difficult to achieve but the strategy “stretches us to create new things by tapping into the brightest minds we can”.

He also claims the company, founded in 1984, has been reusing materials for the past 25 years and recycled hundreds of millions of kilograms worth of products.

“Our closed-loop system is one of the best processes in the world and we’ll see much more of this in the future,” he adds.

“We made a similar statement a decade ago for 2020 and we’ve exceeded those targets.

“So we don’t exactly know how we’re going to make it happen but what I’ve seen is, when you challenge 20,000 engineers, scientists and PhDs, they aren’t scared but excited.”