How is the Covid-19 Pfizer/BioNTech vaccine being distributed? 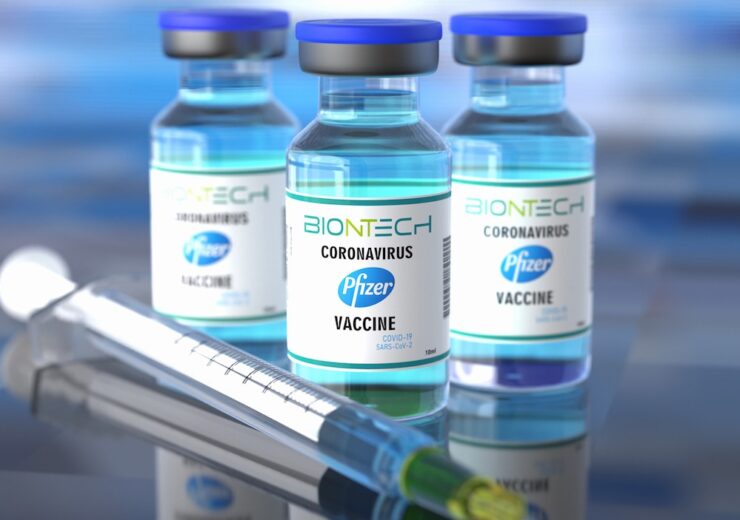 In the UK, doses of the vaccine are being developed at Pfizer’s manufacturing facility in Belgium (Credit: Shutterstock/Giovanni Cancemi)

This was swiftly followed up by similar announcements being made by US-based biotechnology company Moderna and the UK’s Oxford vaccines.

The Covid-19 distribution and vaccination process is seen by many to be the largest such undertaking in human history, only even vaguely similar to that of the flu vaccine.

Speaking to NS Packaging, Glenn Richey – Harbert eminent scholar and chairman of the department of supply chain management at the US-based Auburn University – says there are some differences, most notably that the flu vaccine is “not being transported at the scale we’re seeing here”.

He adds: “With the flu vaccine, we have typically one season or in some places maybe two, so it ebbs and flows in terms of the seasonality of the needs.

“That’s not the case with Covid-19, even though we’re seeing spikes, there’s a constant demand that’s going to be out there.

“The other thing that the flu is there’s time to analyse, prepare, and expect there’s a delivery date that we need to get to and our delivery date from the manufacturer is immediate.”

How is the Pfizer/BioNTech Covid-19 vaccine being distributed?

Speaking at the time, MHRA chief executive Dr June Raine said: “We have carried out a rigorous scientific assessment of all the available evidence of quality, safety and effectiveness.

“The public’s safety has always been at the forefront of our minds – safety is our watchword.

“I’m really pleased to say that the UK is now one step closer to providing a safe and effective vaccine to help in the fight against Covid-19 – a virus that has affected each and every one of us in some way – and in helping to save lives.”

Given the green light for disruption on 2 December, the vaccine began being administered to people on 8 December.

In the UK, doses of the vaccine are being developed at Pfizer’s manufacturing facility in Belgium.

Once one is made, it’s put into bespoke vaccine freezer boxes that can hold between 1,000 and 5,000 doses.

In each of the boxes, there are five 200-vial trays, which are placed in an “inner dry-ice” sleeve, with a dry ice tray placed upon the top of all the vials.

Topping off the box is a GPS monitoring device that relays temperature data to those tracking the transportation in order to ensure they’re delivered safely.

Richey says: “One of the things Pfizer’s talking about is GPS-enabled temperature sensors, so not only does this allow for the track and trace, but it shows whether or not the integrity of the vaccine has been impacted by temperature.

“Those are more expensive, but are probably vital to making sure that the packages maintain their integrity over time.”

Once they are delivered to the vaccination centres, they stored in fridges – with there being more than 1,500 immunisation centres in England to receive the vaccine vials.

In England, there are more than 50 NHS coordination hubs that will oversee the vaccine rollout in parts of the country hardest-hit by Covid-19.

The NHS trusts will coordinate logistics for their local areas and be responsible for the vaccination of their workforces and those of trusts in neighbouring areas.

The Pfizer vaccine must be kept in ultra-cold storage at around -70 degrees celsius, with the company developed shipper packed with dry ice will maintain this temperature for ten days.

Canada became the second country in the world to approve the Pfizer/BioNTech vaccine, with 249,000 doses due to arrive by the end of the year.

The initial supply will be limited, with more vaccines becoming available in spring 2021, with vaccine transport keeping early doses out of most of its care homes.

This is due to Pfizer advising Canadian health officials to administer the early doses of the vaccine at sites where they are first delivered in large batches – with this similarly being the case in the UK, where first doses were delivered to hospitals and not care homes.

A month prior to Canada and the UK’s approvals, Pfizer/BioNTech published its vaccine fact sheet for distribution in the US.

It states that its distribution is built on a flexible, just-in-time system that will ship its frozen vials directly to the point of vaccination.

In the country, its distribution will largely ship from its Kalamazoo, Michigan site direct to the point of use (POU) – with it also using its existing distribution centre in Pleasant Prairie, Wisconsin.

Alongside this, it will utilise road and air modes of transportation in the US, where it expects to get a product to any POU within a day or two.

Additionally, the storage vial units across all its distribution units throughout the world will maintain the vaccine for up to 10 days unopened.

What tests could the Pfizer vaccine supply chain encounter?

The reason why Pfizer/BioNTech is distributing the doses directly to the POU is, in part, to limit the amount of human handling of the vials there are.

Richey explains: “If you can touch it once when you put it in the vehicle and touch it again when it comes out of the vehicle – that’s the best for the life of the product.

“However, if we’re talking about a vaccine that’s shipped to a warehouse, distributed in a range of different vehicles, and then put on built runs where they drop them off at a hospital or pharmacy, there’s going to be a lot of handling.

This, in turn, puts the vaccines at risk of losing their integrity, because of the change in temperature over time.

“Now I don’t know exactly what the Pfizer solution for that looks like, but I do know they’re using a tray device that uses a dry ice pod that holds the vaccine, and that’s how they’re going to get the 1,000 to 5,000 doses per box.

“And there are some reports that say they are more likely to go with a smaller quantity, and that may be relative to how that liquid nitrogen with dry ice is able to keep the product cold.

“I’m worried and sceptical, and I don’t want to worry the population but there are lots of things that happen in product distribution that the customer never sees, whether it’s handling, storage or things getting delayed, but all of these things have risk.

“Traditional vaccines have a failure rate of 5% to 20%, depending on what it is, and so every time you handle this, every time the supply chain slows down, you can potentially increase that failure, so that’s obviously a concern.”

One positive, specifically in the US, is the fact that Pfizer/BioNTech is utilising existing supply chain providers including FedEx, DHL and UPS.

These businesses have experienced full traceability, meaning they can see where the vaccine is at all times, and where it went along the stops.

Lisa Anderson, who prior to setting up her own supply chain consultancy worked for a company that distributed products to hospitals, nursing homes and at home care places, believes it’s a good idea to use existing networks.

Speaking to NS Packaging, she explains: “There’s a network already set up for those avenues, so let’s not create a new one and instead utilise an existing network, pretty much taking priority over other supplies that might get delivered – but it makes sense.”

Describing the track and trace capabilities of these companies, she adds: “There’s a lot of things you can do these days with IoT and technology to better monitor the vehicles and its drivers, with some even capable of knowing whether or not a driver needs to pull over for a rest.

“Some of these aren’t specifically about the vaccine, but there’s a lot they can do to trace where their trucks are.

“And for sure when it comes to the vaccine, they’re going to want to keep a secure supply chain because that’s important to the whole thing.”

Alongside this, planes are going to be leaving Pfizer facilities in the US daily to take vaccines around the country and the world.

Anderson adds: “So DHL, FedEx and UPS are working on the distribution plans, but the planes are going to be the ones flying.

“The nice thing about a plane is it doesn’t have to be a FedEx plane or something because they’re geared to distributing it widely, but they’re also using charter planes, so there’s plenty of options when it comes to how to fly the vaccine.

“And this is especially the case these days, because you can use passenger planes – as although they’re not set up as nicely, they can be converted.”

Richey adds: “An issue with air transportation is that, thanks to Covid-19, we took a lot of routes out of the air and so they’re not as many of those resources moving around the world, much less moving around the UK and US, so that puts some restrictions down.

“The positive is that some of those commercial airlines that aren’t carrying passengers have been able to outfit the regular cargo hole and passenger areas with ways to put products there instead.

“But my expectation is that governments are going to have to get involved and help support those businesses at a pretty serious level.”

Simply due to the temperatures involved, Richey believes the distribution of the Moderna vaccine is going to be “more manageable” simply due to the fact it can be maintained in a regular refrigeration unit.