Five businesses that are looking to operate in a circular economy 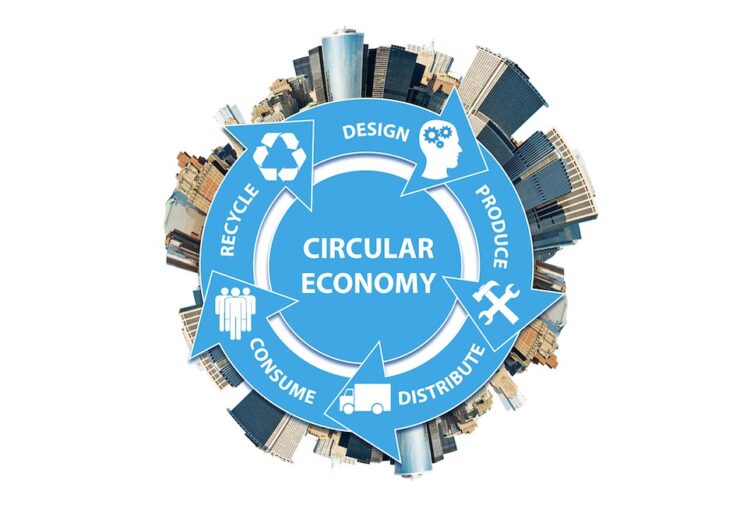 The Ellen MacArthur Foundation's New Plastics Economy Global Commitment was set up in 2018 to bring together businesses, governments and other groups behind common targets to address plastic waste and pollution at source (Credit: Shutterstock/Elnur)

It discovered that companies have made progress on incorporating recycling content in their plastic packaging.

The report also found that moves have been made to phase out the most commonly identified problematic items – such as PS and PVC packaging, undetectable carbon black pigments, and single-use plastic bags and straws.

The circular economy organisation’s New Plastics Economy Global Commitment was set up in 2018 to bring together businesses, governments and other groups behind common targets to address plastic waste and pollution at source.

Launched alongside the UN Environment Programme, it commits all of the more than 500 firms signed up – including Coca-Cola, Amcor and PepsiCo – to make 100% their plastic packaging recyclable, reusable or compostable by 2025.

NS Packaging looks at five of these businesses to find out what they’re doing to tackle plastic pollution and push forward the circular economy.

How five businesses are pushing themselves toward the circular economy

One of the signatures of the New Plastics Economy Global Commitment is French multinational food-products corporation Danone.

As of 2017, 86% of its packaging was reusable, recyclable or compostable, while more than 50% of its water volumes were sold in reusable jugs.

Its end goal is that, by 2025, every piece of packaging it uses – whether that’s a bottle or a yogurt cup – is reusable, recyclable or compostable.

In order to achieve this, the firm is eliminating plastic that’s not entirely necessary, such as labels from bottles.

Speaking at a webinar event hosted by the Ellen MacArthur Foundation, Danone’s senior vice-president, chief cycles and procurement officer Katharina Stenholm added: “But I would say the most important thing is boosting reuse.

“So today we already have one-third of our total volume of packaging being reused – so the packaging comes back to us, it’s cleaned and then reused.

“The recycled content also plays a big role here, so all in all these are what we’re doing as part of our reduction.

“As part of our commitment, our businesses are aiming at halving the use of plastic bags by 2025 – so the direction of travel is reduction.”

In addition, it’s stepping up investments in private initiatives that strengthen circular infrastructure, especially in countries that lack formal collection systems or where there is a high risk of leakage in the environment.

As part of this, Danone has given more than $5m to the Closed Loop Fund, which develops large scale recycling in the US.

The firm is also looking to invest in similar initiatives, such as Circulate Capital, which operates in south-east Asia.

Alongside this, Danone is calling for a UN treaty on plastic.

Stenholm explained: “We can design the most recyclable packaging, but if we don’t have the collection in place, we will never achieve our targets.

“Therefore, we think it’s really important that all of our aspirations get anchored in public policy.

“And what we at Danone are calling for is a standardised form of collection and a harmonisation of the regulatory framework.”

In addition to being a signatory of the New Plastics Economy Global Commitment, drinks giant Coca-Cola has set its own international business-wide targets.

Set out at the beginning of 2018, the firm stated that it aimed to collect and recycle as many bottles and cans as it sells each year by 2030.

Speaking at the time, the company’s CEO James Quincey said: “Consumers around the world care about our planet.

As part of this work, Coca-Cola is looking to create packaging that contains at least 50% recycled materials by 2030, as well as pursuing the goal to make all its consumer packaging 100% recyclable by 2025.

The firm is also driving forward action that supports the development of more sustainable plastics and reuse systems.

Alongside this, it’s working with peer businesses, suppliers, bottling partners, NGOs and local governments to create solutions in the areas where the need is greatest, in order to drive forward the circular economy.

Founded in the US in 1886, SC Johnson is one of the world’s most recognisable consumer chemical and household companies.

As part of its work to hit its goals, the New Plastics Economy Global Commitment signatory announced in September 2019 it had removed 1.7 million kilogrammes of plastic from its primary packaging.

In addition to this, 94% of the company’s plastic packaging is reusable, recyclable or compostable.

That same year, it launched its reusable concentrate system in partnership with Amazon and other online retailers, with this being rolled internationally to Canada, Mexico, the UK, China and Japan.

These refills come in small, easy-to-pour bottles made of HDPE plastic – with consumers able to refill their trigger bottle with a tap and one bottle of concentrate.

“In addition, we’re looking at a smaller scale innovation with Major League Baseball in the US to recycle cups in the stadium and turn them into recyclable packaging.

“Alongside this, we’re looking at community-based recycling for Ziploc products where we’re helping to enable consumers to drive recycling.”

SC Johnson is also looking to “aggressively” encourage its business units and brands to look for ways to involve consumers and drive recycling.

VanderMolen added: “We’ve looked at what I would call innovative community-based programmes to try to make it easier to recycle.

“In terms of targets, our philosophy is to be conservative when setting targets, aggressive in reaching them, and constantly reload them.”

For more than a decade, consumer goods company Unilever has been at the forefront of sustainability – with packaging waste being one of the key pillars of its Sustainable Living Plan (USLP).

Launched in 2009, the current incarnation of USLP sets its pathways to achieving three all-encompassing goals, which includes helping more than a billion people to take action to improve their health and well-being by 2020.

Alongside this, it wants to halve its environmental impact by 2030 and enhance the livelihoods of millions of people by 2020.

By 2025, the firm wants to increase the use of post-consumer recycled plastic material in its packaging to at least 25%.

By the same time, Unilever is also looking to halve the amount of virgin plastic it uses in its packaging and see an absolute reduction of more than 100,000 tonnes in plastic use.

In September 2020, the firm launched a “100%” recyclable packaging range for one of its brands – Persil.

Alongside this, the container was developed to contain 50% post-consumer recycled plastic.

He explained: “We were very privileged to have Paul, and in the time I have been working with Alan, I have seen that he has the mentality that this is the right thing to do.

“The first thing is he’s very passionate about these brands and he is pushing that message very very hard that the brands need to do the right thing and there is a social kind of aspect to it.

“I don’t believe that Alan is completely following in Paul’s footsteps, I think he’s doing it in his way in terms of how he’s pushing the business and really driving us much harder.

“These targets are tough, let’s make no joke about it, they are tough, but he’s passionate and has instilled this passion right throughout the business from the top to the bottom.”

In 2007, cosmetics giant L’Oréal began to engage in policies to enhance its packaging based on three pillars.

The first of these is the idea of respecting the health and safety of the consumer and of biodiversity.

L’Oréal also wants its businesses to reduce the weight and size of its packaging, promote rechargeable or refillable systems, and replace some materials with less impactful materials by promoting the circular economy.

In June 2020, the firm launched its “L’Oréal for the future” sustainability programme – which laid out a set of ambitions for 2030.

As part of this, it has committed to making 100% of plastic packaging from either recycled or bio-based sources by this time.

“The challenges the planet is facing are unprecedented, and it is essential to accelerate our efforts to preserve a safe operating space for humanity.

“We do so in our own business operations and in our contribution to the society at large.

“We know that the biggest challenges remain to come and L’Oréal will stay faithful to its ambition: operate within the limits of the planet.”

The firm is also looking to operate within “planetary boundaries” – which are limits that, if crossed, would compromise the Earth’s ability to be a habitat for human development.

As part of this, it has set itself defined new quantifiable targets for 2030, focused on three environmental issues – these being the preservation of biodiversity, sustainable water management and the circular use of resources.

The company is also aiming to both continue to reduce its direct environmental impacts, and cut the impacts of its entire activity including those of its suppliers and consumers.